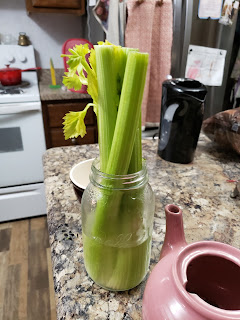 You probably already know this...
Yesterday, I discovered that the celery in our refrigerator was getting limp, so I cut off the tips that were drying out, as well as the root end, washed it in cold water, and then put the stalks in a jar of cold water and placed that in the fridge overnight.  This morning, it was nice and crisp again!
Posted by loves2spin at 2:35 PM 5 comments:

We've waited and waited for the soil in our garden to get dry enough to cultivate and plant.  It finally did and late last week my Garden Fairy came out to help us.  We are not planting as many things this year as we've done in the past.  For instance, I'm not going to plant carrots.  The reason is that doing a lot of hand weeding is hard on my hands as I have some arthritis in them.  Our garden is 75 feet long by 100 feet wide.  This year, instead of "playing" so much, it will be more straightforward.  We both came down with COVID - 19 at the end of February and although we are fine, we don't have all of our energy back yet. That requires cutting back in some areas. The rows in the garden will be far enough apart that our rototiller will easily be able to do most of the cultivating.

You can see here how we've planted our sweet potatoes.  The ground was tilled, then a ridge was made, 75 feet long.  Next, we planted about 50 sweet potato plants in there, 18 inches apart in little holes that we filled with water and "mudded them in." The last step was to spread some weed barrier fabric over both sides.  I planted about 2 pounds of onion sets up there with them, too, as rabbits hate onions, but they love sweet potato leaves.  Later in the season, I will use "Shakeaway" for rodents.  We get terrible vole damage on the tubers if I don't do that. Here you can see two sweet little baby apples on one of our two Transparent apple trees. 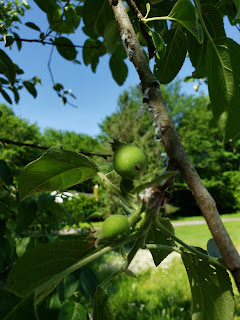 And here is a California Wonder sweet pepper seedling. I was able to grow all of my own seedlings this year.  I am not sure it saves money, but it does allow me to choose my own varieties to grow instead of only being able to purchase the few that are available locally. 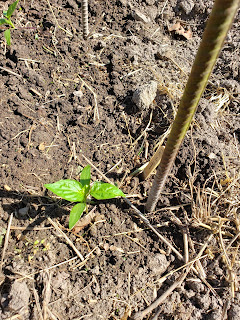 Here is a list of what we planted.  Sweet corn, sweet potatoes, Irish potatoes (Kennebec), green bush beans, okra, sweet peppers, jalapeno peppers, onions, eggplant, cucumbers, zucchini squash, sugar snap peas, paste tomatoes, Rutger's tomatoes, cherry tomatoes, and an heirloom German tomato variety. We hope to put out more sweet corn in about 2 weeks so our season will last longer. Oh my goodness, how we love sweet corn!
In the spring, we plant hope.  We hope for the fruit of our effort. Sometimes it's wildly successful, sometimes it's a bit disappointing, but it's never failed to give us at least some good food. I've been gardening since 1976 when my second son was born.  I remember sitting and nursing him, snapping green beans, and watching the pressure gauge on the canner, all at the same time. That was a golden year for me.  I learned to can, had a fabulous, although rather small, garden, and our 3 oldest children were very young. We rented a house on a farm in Nebraska. Even though I did not have much space in the garden, (it was about 600 square feet) I was able to can 90 quarts of beans!  I also canned tomatoes and made lots of pickles.  I was very proud of my accomplishment. I could write about it until your eyes glazed over, but the memories are precious.
So, now we wait. I look at pictures of last year's harvest and drool. We're still eating sweet potatoes and canned vegetables from last year as well as applesauce and apple butter, as the trees were very productive.  I do love to garden. I'm 72-years-old now and hope I can continue for the rest of the time I have left on this earth.
Happy Spring to all of you Gentle Readers
Posted by loves2spin at 2:21 PM No comments: 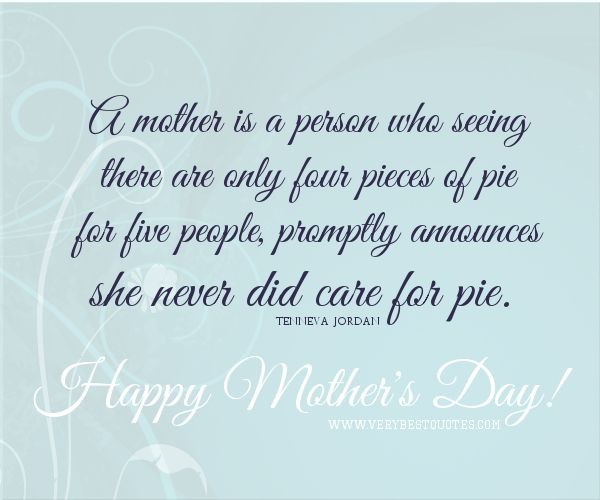 For 11 years I took in sewing, mending, and alterations to raise a little more money for us.  My "bread and butter" was hemming blue jeans for my customers.  I was thinking about that this morning and how when I was a girl, we did not hem jeans that were too long.  We just folded the hem up, like this!

This reminds me of the old adage, "The cobbler's children have no shoes."  I will happily hem jeans for other people, but for myself?  I put it off and put it off.  I've finally just returned to my roots.  :)

Posted by loves2spin at 4:59 PM No comments: 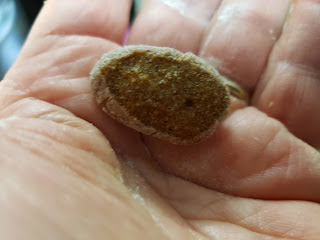 I have a very old recipe that came from my paternal great-grandmother for "Peppernuts."  The German word for that is "Pfeffernusse"  It's a kind of little cookie that is very hard, sweet and spicy.  My family recipe is also simple and it would have been something that almost anyone could have afforded to make back then.  Great-Grandmother had a wood burning cook stove with a "reservoir" on the side, which was a steel box they would fill with water so they could have hot water available.  At Christmastime she kept that full of peppernuts for the children to enjoy.

The thing to do is make the peppernuts a few weeks before you plan to eat them, because you want them to become very stale and hard. They do not taste stale, however.  They are good.  I always say when I eat one, it's nothing special, but I can't stop eating them!

I decided I wanted to make some this year, but the original recipe calls for lard and also just white flour.  Today I made a batch (actually half of a batch), left out the added fat and used whole wheat flour.  They turned out just fine and are very tasty!  Of course, they aren't dried out yet, but if the weather cooperates, they should be hard by Christmas Day.

Here are some pictures of the progression and I'll leave the recipe I used at the end.

Here's the dough in the bowl. 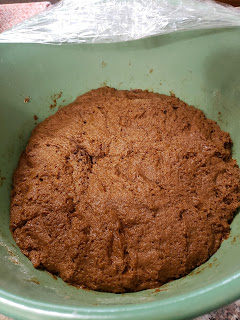 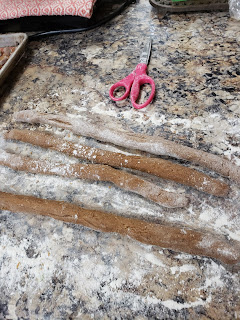 Then, using a pair of scissors, cup the ropes into small pieces and arrange then on a baking sheet. 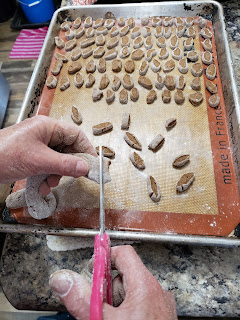 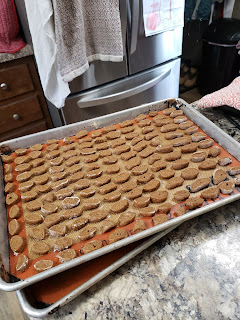 When they are done, dump them into a brown paper bag. When they are cool, close the top and let them stay in the bag until you are ready to use them.  They will get dry and hard and yummy. 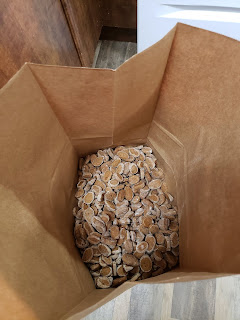 Peppernuts!
Ingredients:
3 cups water
1 Tablespoon yeast (or one little package)
1 cup molasses
1 1/2 cups sugar
1/2 teaspoon ground cloves
1/2 teaspoon ground ginger
1 1/4 teaspoon ground cinnamon
1 teaspoon black pepper
1 teaspoon salt
about 3 1/2 cups of whole wheat flour
Dissolve the yeast in lukewarm water.  Add enough whole wheat flour to make the mixture the consistency of thick gravy.  Add molasses, sugar and spices. Stir well.  Start adding more flour, gradually, and stirring until it is like stiff bread dough. Do all of this in a large bowl.  Cover tightly with plastic wrap and every time you notice it has doubled in bulk, punch it down and re-cover. After at least 36 hours, and up to 48, it is time to bake the Peppernuts
Pre-heat the oven to 400F. I used silicone mats on my baking sheets.  That works very well.  You could use parchment paper, if you like.  Roll the dough, a handful at a time into a rope and snip off pieces with a pair of scissors and arrange them on a baking sheet.
Bake for 10 to 12 minutes, then dump them into a brown paper bag.  You don't want them to stay moist, so if you don't have a bag, maybe you could dump them onto a cloth and when they are cool, cover them with the cloth.  In any case, I wait until they are all cool, close the bag and let them sit for a number of days until they are hard and crunchy.
This is half the recipe that we've always made, but since I was experimenting with changing the recipe by taking out the fat and adding only whole wheat flour, I didn't want to take a chance of wasting so much.
I did use white flour to prevent sticking when I was rolling them out.
I hope you enjoy these special little cookies as much as we do.  My aunt used to make these and send them to my uncles that served in the Second World War when they were overseas.
Posted by loves2spin at 6:37 PM 2 comments:

This is a blog, after all.

Only occasionally have I blogged about anything that really wasn't "homemaking" related. Something very troubling happened yesterday...

My husband had some surgery a couple of days ago.  He's fine.  Don't worry. He had to spend the night at the hospital for observation so I spent the night in a motel. Yesterday morning I left my motel and drove to the hospital to await his discharge. Just one city block from my destination, I was in the middle lane of a main road in that city. I stopped at an intersection and looked over to the right. I was surrounded by other cars. It was a busy time in the morning. I saw a man standing in the middle of the intersection road near the intersection. I thought and probably said out loud,  "Hey, mister.  Get off the road!" Then he started to walk a little and collapsed on the road. Shortly he got up and was staggering around and fell a second time. He was completely disoriented.  He came onto the road I was traveling and fell again and someone actually honked at him! He moved a little closer to the curb and sat there. I wanted to stop and help him and didn't know what to do. I hesitated and I got honked at! I concluded there was no safe way to stop, so I proceeded to the hospital parking lot and called 911 emergency services. The woman I gave the report to said they would send police to check on him. I have no idea what happened. He could have been struck by a car. I will never know. It broke my heart! I wanted to take him by the hand and say, "Hey, let's get you onto the sidewalk" and then call 911.

I got to thinking about it later and I believe that if it had been a DOG or a momma duck with babies behind her, most people would stopped and traffic would have stopped and the dog or whatever would have been rescued.  I don't understand people.  I imagine some of them did not notice him, but a lot would have had to see him. It's tragic. 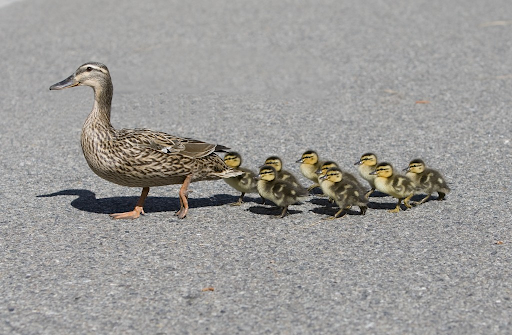 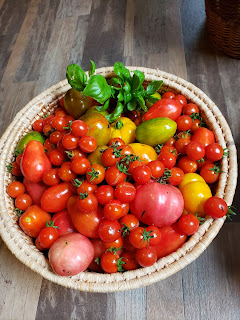